Saratoga County is a treasure trove of houses, buildings, and businesses boasting tall towers, classic columns, and symmetrical details you don’t need to be an architect to appreciate. Check out our suggestions below for examples of exceptional architecture throughout the area and plan a self-guided tour. Take a relaxing drive through the county or a walk through one of the historic neighborhoods and see what you can find! 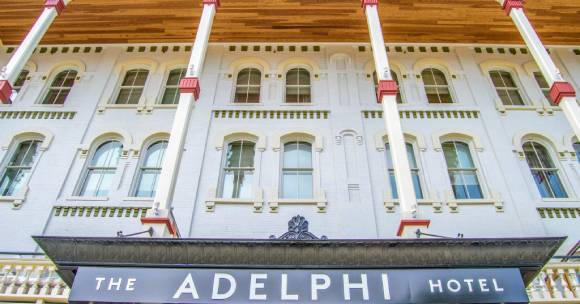 Perhaps one of the best examples of incredible architecture in Saratoga, the Adelphi Hotel stands as the last of the grand Victorian hotels from the 19th century. The hotel was originally constructed in 1877 and underwent a major renovation in 2016, reopening in 2017. While more structurally sound and modernized, the Adelphi still exudes the charm of an old-world era.

The exterior of the building looks much like the original, and inside guests are wowed by the restored grand staircase, 11-foot ceilings, 140-year-old mirrors, and all the dozens of little details that pay homage to the history of the hotel. 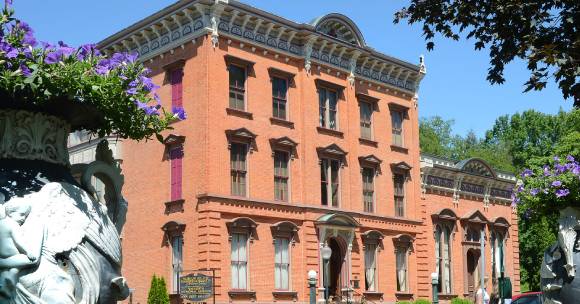 The Canfield Casino was built in 1870 by John Morrissey as a gaming house for men. Richard Canfield took the building over in 1894 and added a dining room with a vaulted ceiling and stained-glass windows, as well as a fish pond on the grounds.

The building is listed on the National Register of Historic Places and is home to the Saratoga Springs History Museum. It’s considered an example of Renaissance Revival Architecture, known for square, symmetrical buildings and columns.

Download the Congress Park map and brochure for more »

Explore the East Side of Saratoga Springs

The Batcheller Mansion Inn is the first stop in the East Side Neighborhood, which includes Circular Street, Union Avenue, and other points east of downtown.

The Batcheller Mansion Inn stands as the epitome of the Victorian architecture and old-world beauty Saratoga Springs is known for. The high Victorian gothic mansion draws influences from the French Renaissance, Italian styles, and Egyptian styles.

The website describes the building in vivid detail: “The red and gray slate mansard roof is bifurcated by dormers, each accented by a huge clamshell arch. The ivory stucco facade is studded by a myriad of ornate bays and its conical tower, resembling a minaret, is right out of Arabian Nights.”

The East Side Neighborhood is filled with large houses and grand buildings exhibiting a variety of 19th and 20th-century architectural styles, although it was largely farmland up until the 1860s. In this area, you’ll see examples of the Greek Revival style and a range of Victorian styles, such as Gothic, Italianate, Second Empire, and Queen Anne.

The homes on Union Avenue, such as in the above picture, have gorgeous classical columns, wraparound porches, and the distinct towers that are indicative of Victorian architecture. As you walk or drive through the neighborhood keep an eye out for narrow alleyways that lead to carriage houses and barns that used to serve the larger homes.

See a map and brochure of the East Side Neighborhood »

Head south on Route 9 to Saratoga Spa State Park for more striking architecture. Here are just a couple of the buildings you’ll see:

The Lincoln Baths on the corner of Avenue of the Pines and Route 9 was considered one of the largest bathhouses in the world when it opened in 1930. The building is comprised of stone, steel, terracotta, and concrete, and has a commanding presence with its grand entrance marked with tall marble columns.

On Roohan Realty’s Architecture and History of Saratoga blog, they quote James Kettlewell, author of Saratoga Springs: An Architectural History: “The Lincoln Baths were the first building in Saratoga Spa State Park to be a variation on the Federal style for patriotic reasons, where it invokes a nostalgic feeling through architecture for when the American republic was being formed.”

Known to locals as “SPAC,” the Saratoga Performing Arts Center was a huge undertaking for architect Bob Rotner, who initially designed the unique open-air venue as a summer home for the New York City Ballet and Philadelphia Orchestra.

Critics of the building initially insisted it was too long, too open on the sides and back, and would have terrible acoustics. “Everybody ran away from it,” Rotner told The Saratogian in 2016. “All of the experienced people said it would be a big disaster.”

Fortunately, the critics were wrong, and SPAC was a huge success and still is today, as it’s considered one of the premier arts and entertainment venues in the country.

Make Your Way to Ballston Spa

The Village of Ballston Spa is next on the self-guided tour!

The Union Mill Complex was home to George West’s paper mill during the late 19th century; West is credited with inventing the square bottom paper bag. He sold the business and the building to the Union Bag & Paper Company in 1899. Since then, the impressive structure has been home to Bischoff’s Chocolates, Tuffitle Plastics, and today it’s used as an office space, retail space, and a restaurant.

This complex consists of three brick buildings and embraces the Italianate, Second Empire style of architecture common during the late 1800s. This style served as an alternative to Gothic or Greek Revival architecture and was primarily characterized by the use of a mansard roof, where there’s a change in slope near the top.

The Brookside Museum was initially built as a hotel in 1792 and is considered to be one of the oldest structures in the Village of Ballston Spa. The building has tall windows, two chimneys on either end and tall white columns that are classic examples of Greek Revival architecture.

The museum has been used as a school, a boarding house, a private residence, and as apartments. It’s listed on the National Register of Historic Places and is appropriately home to the Saratoga County Historical Society.

The tour continues east on Route 29 as you make your way to Schuylerville.

The Schuyler House embodies the Georgian style of architecture, which is characterized by solid symmetry and proportion with window and door placement. This house was not the original structure on the property, though, as General Philip Schuyler’s first country home was destroyed by the British forces following the Battles of Saratoga in 1777.

The house that stands today was built on top of the previous home’s foundation and was completed in just 29 days. This house is smaller than the original, although additions were later added on.

Wander to the West Side of Saratoga Springs

As you head up back north towards Saratoga Springs make sure to drive through the West Side Neighborhood.

The West Side Neighborhood of Saratoga Springs includes Washington Street, Franklin Square, Franklin Street, Grand Avenue, and more. Throughout the district, you’ll find buildings constructed in the mid to late 1800s, with nods to the French Renaissance, Greek Rival, Colonial Revival, and more.

Universal Preservation Hall, depicted in the above photo, was built in 1871 and is one of the earliest examples of High Victorian Gothic churches in the country, although today it serves as a performing arts venue. The bell tower was once the tallest structure in Saratoga Springs and contains a 3,000-pound bell.

View the West Side Neighborhood map and brochure »

As you embark on your tour of architectural beauty in and around Saratoga you’ll undoubtedly uncover more historic homes and stunning buildings. What would you add to the list?

Find more maps and brochures for your self-guided architecture tour »